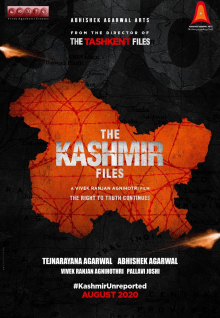 Vivek Agnihotri's The Kashmir Files is a 2022 Indian Hindi-language drama film written and directed by him. The film, which was produced by Zee Studios, is based on the exodus of Kashmiri Hindus during the Kashmir Insurgency. Anupam Kher, Darshan Kumar, Mithun Chakraborty, and Pallavi Joshi star. It went on to become a box office hit. It has been declared tax-free in several states governed by the Bharatiya Janata Party. Critics complimented the film's lines, background study, and performances by the cast, notably Kher's.