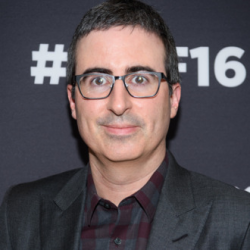 Summary
John William Oliver is an English comedian, writer, producer, political commentator, actor, and television host. Oliver started his career as a stand-up comedian, both in the United Kingdom and United States. He came to wider attention for his work on The Daily Show with Jon Stewart as its senior British correspondent from 2006 to 2013. Oliver won three Primetime Emmy Awards for his work as a writer on The Daily Show and was its guest host for an eight-week period in 2013. In addition to The Daily Show, Oliver co-hosted the satirical comedy podcast The Bugle (2007?2015) with Andy Zaltzman, with whom Oliver had previously co-hosted the radio series Political Animal, and hosted John Oliver's New York Stand-Up Show on Comedy Central from 2010 to 2013. He has also acted on television, most notably in a recurring role as Ian Duncan on the NBC sitcom Community, and in films noticeably voiceover work in The Smurfs (2011) and its sequel and the forthcoming remake of The Lion King.
Movies List