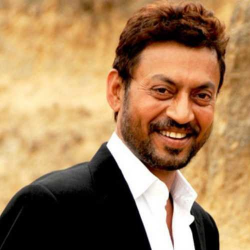 Saahabzaade Irfan Ali Khan credited as Irrfan Khan or simply Irrfan, is an Indian film actor, known for his work predominantly in Hindi cinema, as well as his works in British films and Hollywood. In a film career spanning almost thirty years and featuring in more than fifty domestic films, Khan has received numerous awards, including a National Film Award and Filmfare Awards in four categories. Film critics, contemporaries and other experts consider him to be one of the finest actors in Indian cinema for his versatile and natural acting. In 2011, he was awarded the Padma Shri, India's fourth highest civilian honour for his contribution to the field of arts.

Bollywood actor  Irrfan Khan passes away at Kokilaben Hospital in Mumbai while battling rare cancer. He was surrounded by his family as he breathed his last. Actor Irrfan Khan has died at the age of 54, after being admitted to Mumbai’s Kokilaben Dhirubhai Ambani Hospital on Tuesday, where was under observation for colon infection. The actor in 2018 had announced that he’d been diagnosed with a neuroendocrine tumor.