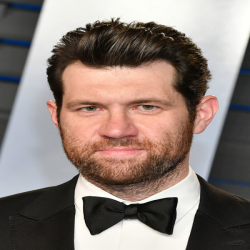 Summary
Billy Eichner is an American comedian, actor, and producer. He is the star, executive producer, and creator of Funny Or Die's Billy on the Street, a comedy game show that airs on truTV. Eichner was nominated for a Daytime Emmy Award for "Outstanding Game Show Host" in 2013. He is also known for playing Craig Middlebrooks on the sitcom Parks and Recreation
Movies List