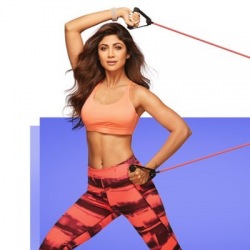 Shilpa Shetty Kundra Was born 8 June 1975 is an Indian actress known for her work in Hindi films, in addition to Kannada, Telugu and Tamil films.

Shetty made her acting debut with Baazigar (1993), following which she played a dual role in the action comedy Main Khiladi Tu Anari (1994), both of which were commercial successes. She then featured in several films that fared poorly at the box office and Dhadkan (2000) marked a turning point. She started in dramas Indian (2001), Phir Milenge (2004), Life in a... Metro (2007) and Kannada drama Auto Shankar.

Shetty became a global figure after winning the 2007 British reality television series Celebrity Big Brother 5, with 63% of the final vote, following an international racism controversy. Shetty married businessman Raj Kundra in 2009, with whom she has a son.