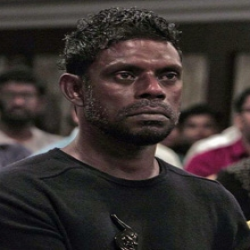 One of the most versatile and sought-after character actors in contemporary Malayalam cinema, Vinayakan made his feature film debut in the 1995 Mohanlal starrer Maanthrikam, and has since appeared in over 40 films in a career spanning over two decades.Vinayakan began his career as a dancer and had a dance troupe named Black Mercury with Fire dance being his forte. Director Thampi Kannanthanam introduced him in Maanthrikam and later in Onnaman. He was noticed for his performances in Stop Violence and Mohanlal starrer Chotta Mumbai.

On June 15, 2019, activist Mridula accused that Vinayakan had verbally abused her over phone when she requested his presence at an event. A case under IPC sections 509, 294 (B) and section 120 (O) of the Kerala Police Act was registered against him based on the complaint of the woman. He was formally arrested and later granted bail by the Hon'ble High Court of Kerala. Vinayakan's phone was confiscated and was sent for forensic tests and he denied saying bad words to the complainant

Vinayakan Born as Vinayakan T. K. in Thoppil Jn, Kochi, Kerala, India. He is an Indian actor, music director, singer. He starts his Career in year of 1995 in the Malayalam film Maanthrikam. He also gets Kerala State Film Award for Best Actor (2016). Vinayakan also composed the song 'Puzhu Pulikal' for the movie of Kammatipaadam. He has also sung songs for Raffi’s new film Role Models and one song for Ordinary fame Sugeeth’s upcoming movie. Earlier, Vinayakan used to perform in dance troupe before coming to cinema.