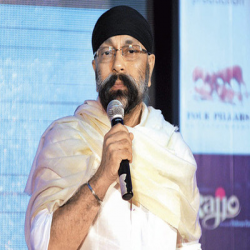 Uttam Singh was born on 25th may 1948 in Punjab, India. One of the most popular musicians during the 90's, Uttam Singh is a multiple award-winning violinist, music director and music arranger who has worked in the Tamil and Bollywood film industries. Having started his career as an assistant to one of the musical maestro's of India, Ilaiyaraaja in numerous Tamil films, Uttam Singh eventually established himself as a popular figure in Bollywood as an independent music composer and music director.
Uttam Singh's father was a Sitar Player, he learned tabla and western violin and his family used to singh Kirtans at various Gurudwaras and religious functions, that's was the income for his family. He worked as violinst for three years, he got the chance  to worked as a violinst for a documentary in 1963 by Mohammad Safi. After that he played a major composers including Naushad, Roshan, Madan Mohan, etc. He became the main violinst for S D Burman's son, Rahul Dev Burman. He worked for over 65 films in several Indian languages and also worked with llaiyaraaja as a music arranger in various in Tamil films. He worked as a Music director. in 1996 he records his first private album 'Om Sai Ram' after that he composed music for his daughter Preeti Singh's album 'Soor' in 2002.