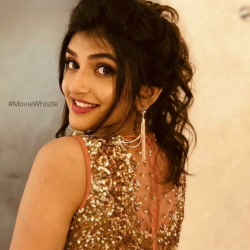 Sree Leela is an Indian film Actress, She was born on July 14, 2001, in Detroit, Michigan, United States. she has worked predominantly in Kannada movie industry. Her Debut Into Kannada film industry through AP Arjun's romantic movie Kiss. she bagged another massive project opposite Srimurali within the flick Bharaate. before she appears on the silver screen, she acted in two most awaited Kannada movies, ‘Kiss’ and ‘Bharate’ which stars Sri Murali in the opposite. Along with acting carrier, she is also studying medical degree.

Sree Leela was born to an orthodox family, was difficult to get permission to act in the films at the beginning. Since her mother is a doctor, she also wanted to become a doctor and she still concentrating on it along with the acting job. Before completing her pre-university college, she got an opportunity to play a female lead role in a Kannada movie, Kiss. She has a very close relationship with Radhika Pandit and Yash where she is calling them as Akka and Jeeju.

Even before she seems on the silver screen, she acted in 2 most anticipated Kannada movies, ‘Kiss’ and ‘Bharate’. However, A.P. Arjun directorial ‘Kiss’ movie considered as Sree Leela’s debut film. The actress had become a popular face in Karnatka even before her first release. All thanks to her charming beauty and phenomenal acting skills on the first teaser of the ‘Kiss’ movie. Along with the acting carrier, she is also studying medical in Bangalore.