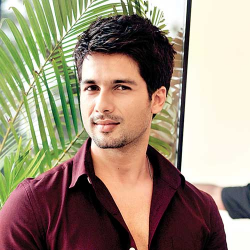 Shahid Kapoor was born in 25th February 1981 in New Delhi, India. he is a Bollywood actor who carved his own way into the Hindi film industry, and his initial roles in the films helped him create a chocolate boy image. he is best known for his films like Ishq Vishq, Jab We Met, Kaminey and Vivaah and kabir singh which become the higher grossing movie of 2019.

Shahid Kapoor is the son of actors, Neelima Azeem and Pankaj Kapur, who separated when Shahid was just three years old. His father then married the actress Supriya Pathak. He has a sister Sana and a brother Ruhan as well as a half-brother named Ishaan.

Shahid Kapoor joined Shiamak Davar Institute of Performing Arts (SDIPA) to learn dance. He appeared as a background dancer in film Taal. The cute faced guy. He also starred in a music video Aankhon Me Tera Hi Chehra by the Aryans. In 2003, Kapoor made his acting debut as a happy-go-lucky college student in Ken Ghosh's love-story, Ishq Vishq opposite Amrita Rao. The film was declared hit at the box-office. The following year, Kapoor reunited with director Ken Ghosh again in the thriller Fida, where he co-starred alongside Fardeen Khan and Kareena Kapoor.

Shahid Kapoor Starring Vivah gave him postive Result this movie was not only appreciated but highly loved by the audiences across the Globe. Then, the superstar never looked back and went on to give hits like Jab We met, Kaminey, Mausam, Haider and Udta Punjab. In 2016, Shahid essayed the role of a drug-abusing rock star in crime drama Udta Punjab. This film was well received by audience and Shahid's performance too was acclaimed by most of his critics. His upcoming films are Rangoon, Rana Rawal Ratan Singh and Sanjay Leela Bhansali's Padmavati, co-starring Ranveer Singh and Deepika Padukone. He was recently seen in Sandeep Vanga's Kabir Singh opposite Kiara Advani.