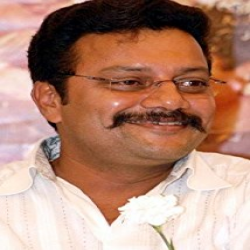 Saikumar Pampana was born on 27 July 1961. he is known mononymously as Saikumar is an Indian actor who appears primarily in supporting roles in Telugu cinema. He is best known for his performances in films like Bus Stop (2012) and Aadu Magaadra Bujji (2013). Other significant acting credits include Ee Rojullo (2012), Present Love (2014) and the comedy thriller June 1:43 (2017). He rose to stardom in Kannada cinema and he also acted in Telugu cinema and Tamil cinema.

he won two State Nandi Awards and three Filmfare Awards for his work in telugu and kannada film. Apart from the film industry, he has done masters in arts. He was also an active participant for NCC, which he was very good at. But he wanted to pursue acting from early childhood. He rose to celebrity as a very successful star in the year of 1996 from the Kannada film Police Story, which was also voice dubbed in Telugu and Tamil. The film became the biggest blockbuster of the year and Sai as a lead hero acted in series of hit Kannada films back to back. His Kannada films Agni IPS, Kumkuma Bhagya, Police Story 2, Lockup Death, Circle Inspector, Central Jail, Police Bete and Mane Mane Ramayana were all major hits at the box office and Sai Kumar became a household name in Karnataka.

Sai kumar in all his interviews says, 'I am indebted to Karnataka for making me a star and giving me Police Story during my struggling days. His recent Kannada blockbuster hit film Rangitaranga, that created records is another milestone in Sai's career. It was one of the top 300 films eligible to be nominated for the Oscars in 2016 and his performance in the film was not only well praised by the critics, but also fetched him an IIFA Award at IIFA Utsavam 2015.