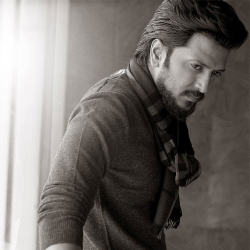 Ritesh Vilasrao Deshmukh was born on 17th December 1978 in Latur, Maharashtra, India. He is an Indian film actor, producer, who works in Hindi and Marathi cinema. He is the son of late ex-chief minister of Maharashtra and Union Minister of Heavy Industries & Public Enterprises India, Vilasrao Deshmukh and Vaishali Deshmukh. He started his career since 2003 with the drama movie 'Tujhe Meri Kasam' after that he made many Bollywood movie, Apart from Hindi films Deshmukh has made his debut as a film producer with the Marathi success 'Balak Palak' (2013).

Deshmukh launched his own production house Mumbai Film Company in 2013 with producing a Marathi film Balak Palak, which won several awards. He has also launched his cricket team Veer Marathi in Celebrity Cricket League which he owned as well as mentored as the team captain co-owned by brother Dheeraj Deshmukh, while the brand ambassador is wife Genelia D'sSouza. Besides this Deshmukh has an interest in social work, he donated Rs 2.5 million to his home town Latur for 'Jalyukta Latur', an initiative to make the parched district water sufficient after the droughts faced by Latur during April 2016. Riteish and Genelia donated Rs 2.5 million towards flood relief in Maharashtra during the 2019 Indian floods.