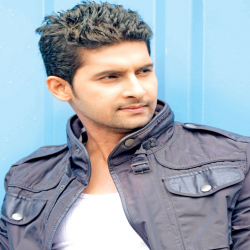 Ravi Dubey was born on 23 December 1983 in Gorakhpur (Uttar Pradesh), India. He is an Indian television actor, Model, Film Actor, Television Presenter. He is best known for his work in Television Serials and He began his acting career in 2006 with a parallel leading role in DD National TV show Teri Kahaani and followed it with roles in lesser successful shows like Doli Saja Ke (2007) and Yahan Ke Hum Sikandar (2007), before starring in popular family drama show Saas Bina Sasura (2010) and Jamai Raja (2014).

He shifted to Mumbai to learn degree in telecom engineering but he learn a career in modeling. He started working as a model. He made his debut in acting with a television show Stree... Teri Kahaani show on DD National. He played a lead role of the character Ravi Agarwal and that show was produced by actor Saira Banu and Dilip Kumar. He was later seen in a small role of Veer in Doli Saja Ke which was a soap opera show on Sahara One. He worked as a lead character in Yahan Ke Hum Sikandar he has worked in more than 40 television commercial ads, includes TVS Victor, Reliance, Mrs. Marino, Nestle, Gee Pee Mobile, ICICI, Fairever, Action Milano Shoes, Santro As model.

He has participated in so many reality shows including Comedy Circus and Kahani Comedy Circus Ki show on Sony Entertainment Televisions. He was one of the participants in celebrity couple dance reality show Nach Baliye in its 5th season with actress Sargun Mehta. The show was telecast on Star Plus and he ended up as a 1st runner-up on the show. He was also part of celebrity couple dance reality series Nach Baliye Shriman v/s Shrimati. He began hosting different TV shows. He was a host of India's Dancing Superstar. which was a dance reality show on Star Plus.

His character as a Siddharth "Sid" in Zee television's serial Jamai Raja was much appreciated by the audience. He was cast opposite Nia Sharma. The show was produced under Grazing Goat Pictures by actor Akshay Kumar and Ashvini Yardi was the co-producer for the show. He and Shabbir Ahluwalia jointly hosted the Zee televisions', Zee Rishtey Awards in 2014.