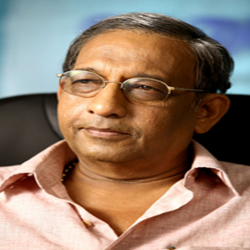 Considered to be one of the greatest actors of Indian cinema, Kesavan Venu Gopal, is known by his stage name Nedumudi Venu. Recipient of multiple national awards and several other accolades, Nedumudi began his career with theater and then ventured into films. He was born on 22 may 1948 in Nedumudi, Travancore (now in Kerala) India. His father P.K. Kesavan Nair, who is a Schoolmaster and his mother P. Kunjikkuttiyamma. His has four elder brothers. he has done his primary eduction from Nedumudi and higher eduction from Champakulam and he learnt art and music since his academic period. After his graducation he worked as a Journalist in Kalakaumudi and as a teacher in a tutorial institute. Besides this he is also talented in Mridangam player.
He is married with T.R.Susheela and the couple has two sons, Unni and Kannan. In his career of cinema life he has acted more than 500 movies, beside this he also a good screenwriter and wrote many stories of the films like Kattathe Kilikkoodu, Theertham, Sruti, Amba Njaane, etc. and has directed one of the film. He was a member of Kavalam Narayana Panicker's dramas. He worked in Malayalam, Tamil and English industry, as well worked in Television also. He got many awards like National Film Awards, Kerala State film Awards, Asianet Film Awards, Filmfare Awards, Kerala Film Critics Association Awards and many more.