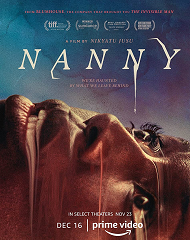 After winning the U.S. Dramatic Grand Jury Prize at the 2022 Sundance Film Festival, ‘Nanny’ a horror genre movie by Nikyatu Jusu was picked by Amazon and Blumhouse Television banner and will release on theatres on 23rd November 2022 and will launch on Amazon Studios on 16th Dec 2022. Film writer and director Nikyatu Jusu came up with a horror movie in her directorial debut and in her debut on the OTT platform Amazon as well. Its star casts are Anna Diop, Morgan Spector, Michelle Monaghan, Rose Decker, Leslie Uggams, and Sinqua Walls. Jason Blum is an executive producer of the film through Blumhouse.

The trailer showcases, Aisha played by Anna Diop is really excited, to begin with, her novel role is looking after a young daughter of a type-A working mom and not-so-present photographer husband Adam played by Morgan Spector. This job is actually to give the required finances to bring her own son to the United States in a few months, though suddenly Aisha is plunged into hallucinations and watery nightmares. The Nanny’s horrifying soundscapes and visuals give the set for Diop’s excellent performance.