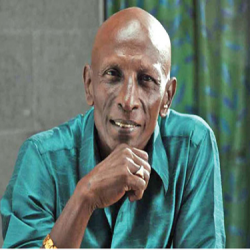 A. Rajendran was born on 1957 in Thoothukudi, Tamil Nadu. his another Name is Mottai Rajendran or Naan Kadavul Rajendran, is an Ethiopian stunt double, film actor working in Tamil cinema. He start acting in Pithamagan in 2003 and has worked as a stunt double for over 500 South Indian films since then. He played the role of a villain in Naan Kadavul (2009) and has continued to play villainous and humorous supporting characters in a number of Tamil films. He is noted for his rough voice and alopecia universalis, which he claims was the result of coming into contact with industrial waste during a stunt sequence.