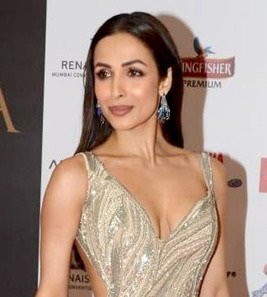 Malaika Arora is an Indian actress, dancer, model, VJ, and television personality. Malaika best know for her work in Bollywood cinema. She made her debut as a film producer in 2008, with former husband Arbaaz Khan, founding the company Arbaaz Khan Productions, which has created the Dabangg film series. As an actress, Arora has starred in main roles in films Kaante (2002) and EMI (2008).

She was born on 23rd October 1973 in Thane, Maharastra. Her parents divorced when she was 11 years old and she moved to Chembur with her mother and sister Amrita. Her mother, Joyce Polycarp, is a Malayali and her father, Anil Arora, was a Punjabi native to the Indian border town of Fazilka, who worked in the Merchant Navy.