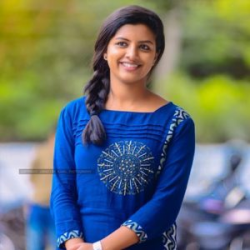 Lijo Mol Jose is an Indian film actress, She is born in Peermade, Idukki, Kerala, India. who mostly appears in Malayalam films. She is known for Maheshinte Prathikaaram (2016), Kattappanayile Rithwik Roshan (2016) and Street Lights (2018).

Just like, other popular stars of the Malayalam Film Industry, here we have got, Lijomol Jose, who is another rising star of Indian Cinema, and who is now pursuing her career pretty great in the Malayalam film industry. If you are very interested to know more about the actress Lijomol Jose Read below

Lijomol Jose was born in Peermade, Idukki, Kerala. Her father Rajeev runs his own business and her mother Lisamma works for the Forest Department. She is currently pursuing her post-graduation course in information and library science at Pondicherry University. She has one younger sister Liya, who is also doing her post-graduation.

Lijomol Jose is a rising Indian actress, who appears in Malayalam and Tamil Cinemas overall. However, she first started her acting career with the Malayalam film industry, in 2016. Well, she first appeared in a very popular hit of the Malayalam film industry known as Maheshinte Prathikaaram, which was released in 2016, leaving the box office to awe-inspiring views and welcome. This even made ways to grow a lot in her acting career, as she received many movies and acting offers after she performed extremely well, in her first movie though.

After her first movie debut of 2016, known as Maheshinte Prathikaaram, she also got opportunities, to act in Kattappanayile, Rithwik Roshan, which was released in the same year 2016. After both these projects, the actress also received her third film known as Honey Bee 2.5 that was released in 2017. However, she has done a lot well, in all of these movies, but all of them in the Malayalam industry though, however, she is actually receiving a lot of acting opportunities from other Film industries too such as Tamil, Telugu as well.

The Malayalam Actress Lijomol  Jose was born in Idukki, Kerala and for last 4 years has been performing in Malayalam & Tamil movies. Lijomol Jose Age is yet to be verified but the Actress started her career in 2016 from Malayalam cinema with movie Maheshinte Prathikaaram where she played the role of Soniya.

NEXT Projects of Lijomol Jose in Tamil & Malayalam- As per the reports the actress has her latest movie named Premasoothram, where Lijomol plays role of Ammukutty. On other hand in she has also hinted that her next project would be a Tamil movie starting in February. I am in talks to sign a Malayalam film as well. It is too early to divulge more about both.