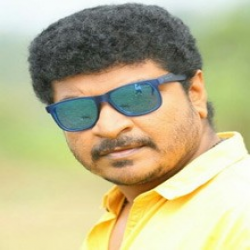 Kuri Prathap is an Indian actor who predominantly works in the Kannada film industry. Majorly appearing in supporting roles, his movie credits include Raam (2009), Rambo (2012), Sharan Adyaksha (2014), and Ranna (2015). In 2017, he appeared in the movie Saheba directed by Bharath. In 2017 he starred in director Chetan Kumar's Bharjari. The movie has Dhruva Sarja, Rachita Ram and Hariprriya in the lead. He is associated with the 2018 Kannada comedy-drama Raju Kannada Medium directed by Naresh Kumar H. N. starring Guru nandan and Avantika Shetty in the lead roles. Kuri Prathap has appeared in around 34 film's of the Kannada.

Kuri Prathap was born on 18th August in Mysore in the state of Karnataka, India. He is an Indian Film Actor, Comedian & Television Personality who is known for his work in Kannada cinema. He became the contestant of Bigg Boss Kannada season 7 in 2019.

Prathap earned the name Kuri Prathap after his stint with a famous show called Kurigalu Saar Kurigalu. Post that, he started getting acting offers and he finally made his acting debut through Kannada film Anatharu in the year 2007. Since then, he has appeared in more than 60 Kannada films mostly in supporting roles. He has worked with almost all the superstars of the Kannada film industry such as Upendra and Darshan among others.

He is presently participating in Bigg Boss Kannada (season 7).