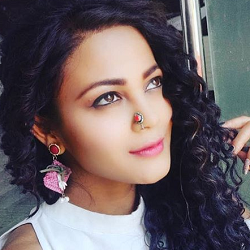 She is currently seen in star plus show Yeh rishte hai pyaar ke. News coming is that young actress Kaveri Priyam she has completed shows like Naagin 2, Pardes Mein Hai Meraa Dil will be part of the show. Kaveri Priyam was born on 22 October in New Delhi, India. She is an Indian Television Actress. She is known for her work in Hindi television series. Her height in Feet Inches - 5'4"

Kaver Priyam She is very talented Indian actress. She was born on 22nd October 1994. She lives in Mumbai but was brought up in the Jharkhand, India. Kaveri Priyam known these languages Hindi, English, Bengali, and Tamil.

She is a well-educated actress. She has completed her school education from Jharkhand in India. And then completed her higher studies from Vellore city of Tamil Nadu, India.
Kaveri Priyam has also done a short term acting course from the Institute of Creative Excellence, Delhi in 2016.

Career Details
Kaveri Priyam has started her acting career from the serial Pardes Mein Hai Mera Dil in 2016. After that serial, she worked in the Nagin 2, Savdhaan India Like T.V. shows.