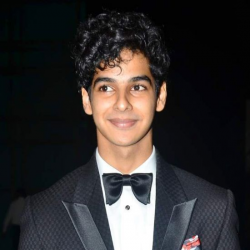 Ishaan Khatter is one of the known Bollywood actors. He is known for his charming nature, the actor has a huge fan following on social media. Ishaan is the younger brother of Shahid Kapoor. The actor is born in Mumbai and his height is approx 173 centimeters. Ishaan Zodiac's sign is Scorpio. The actor's favorite food is Pizza and the favorite color is black.  His favorite movie from Bollywood is Zindagi Na Milegi Dobara and from Hollywood is Paranormal activity, Inception, Gladiator. Ishaan's favorite actor from Bollywood is Deepika Padukone.  He completed his school at Billabong High International School, Mumbai. He completed his university at RIMS International School and Junior College Mumbai. He is a Hindu by religion and he has hobbies like dancing, traveling, and working out. His father is Rajesh Khatter who is Bollywood and TV actor and his mother is Neelima Azim who is a television actress. Ishaan made his film debut in Maji Majidi's Beyond the Clouds in 2017. He has established himself and earned his recognition in the Bollywood Fim Industry. He has done several movies and mini-series. He did his second film with Janhvi Kapoor titled Dhadak. He was earlier seen in Khaali Peeli along with Ananya Panday. He is an amazing actor, through his raw talent he has won the heart of his fans.