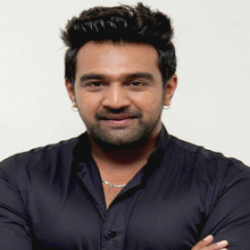 Chiranjeevi Sarja is an Indian film actor popular for his work in the Kannada film industry. He debuted with the 2009 movie Vayuputra in the role of Balu, for which he won the Innovative Film Award for Best Debut (Male). Chiranjeevi Sarja was born on 17th October 1984 in Bengaluru, Karnataka, India. He is an Indian Film Actor who known for his work in Kannada cinema. Chiranjeevi Sarja did his studies from Baldwin Boys High School and he did his graduation in commerce (B.Com) from Bangalore Vijaya College. He began his journey by involving his first job as an Asstt director with Arjun Sarja (Chiranjeevi's Uncle) who is an actor, producer, and director of Southern Films. He made his acting debut from the Kannada film Vayuputra in 2009 ( A romantic and drama film). For that film, he has won the Innovative Film Award for Best Debut (Male).

On 6 June 2020, Sarja suffered convulsions and complained of breathlessness. The following day, he developed chest pain and collapsed around 1:10 p.m . He was taken to a private hospital in Jayanagar in "an unresponsive state"; the doctors declared him dead at 3:48 p.m. (IST), citing cardiac arrest as the cause of death.