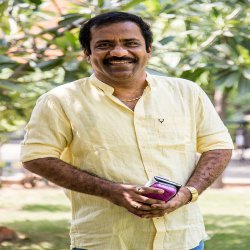 Dr. Velmurugan Thangasamy Manohar was born on 6th March 1960 in Kovilpatti, Thoothukudi, Tamil Nadu. He is professionally known as Charley, People writes his name with spelling as Charlie, Charly, Charli, Charlee. He is an Indian film actor, a comedian who works in Tamil cinema. He has made more than 800 Tamil films as a comedian and supporting actor. He was named after the English comedian Charlie Chaplin.

He started his career as a Staff artist and given more than 1000 dramas within 6 years and he was introduced as Charle in the film Poikkal Kudhirai (1982) by the director Padma Sri Dr. K. Balachandar. He mostly plays the role in Tamil, Telugu and Malayalam language. He is highly talented in miming, mono acting and anchoring in stage shows & he has also performed in various countries. His first movie was 'Anney Anney' (1983) which was success his life, over 800 plus many shows he performed. His previous movie was Dhanusu Raasi Neyargale which was released in 2019.