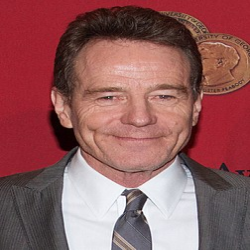 Bryan Cranston is an American actor, director, screenwriter, and producer. His transpiring performance as Walter White in AMC's series Breaking Bad won him four Primetime Emmy Awards and he also twice won the Outstanding Drama Series Award as a producer of the show.

Bryan is the second of three children born to Annalisa, a radio actress, and Joseph Louis Cranston (1924–2014), an actor and former amateur boxer. His father was of Austrian-Jewish, German, and Irish descent, while his mother was the daughter of German immigrants. He has an older brother, Kyle, and a younger sister, Amy. Cranston was raised in Canoga Park, California. His father held many jobs before deciding to become an actor but did not secure enough roles to provide for his family. He eventually walked out on the family when Cranston was 11 years old, and they did not see each other again until a 22-year-old Cranston and his brother Kyle decided to track him down. He then maintained a relationship with his father until his father's death in 2014.