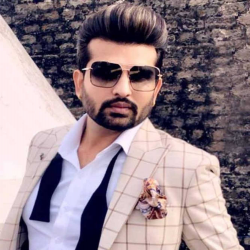 Yuvraj Hans is a Punjabi actor and singer. He is the son of Hans Raj Hans, a Punjabi singer. After completing his education from Laxman Public School Hauz Khas New Delhi and from Apeejay College of Fine Arts Jalandhar, Yuvraj decided to follow his father's footsteps in the Punjabi music industry and is a rising star in the emerging Punjabi film industry. He was born in Jalandhar, but now splits his time between Jalandhar and Mumbai. His elder brother is Navraj Hans, who is also a singer and actor. Yuvraj got engaged to Mansi Sharma in February 2017 and married in February 2019.

His hobby is, enjoys singing, working out in the gym, and long drives with friends. Yuvraj's portrayal of a shy and intelligent college student earned him the debut award at the 5th Punjabi Film Festival.

In his music career, on 23 December 2015, he released his first album, 'Yuvraj', which features nine songs including the hit single 'Paani' released under the label 'Rhythm Boyz Entertainment'. Yuvraj Hans has also lent his voice for the soundtracks of several Punjabi movies. He started his singing career with the song 'Tere Naina', featured in the Punjabi movie Pinky Moge Wali. He sang 'Saiyaan' in Burraahh. His new album will be releasing on 10 July 2016 is 'Dil Di Kasoor', Music & Composed By Gurmeet Singh & Record Label will be on, MovieBox & Speed Records.