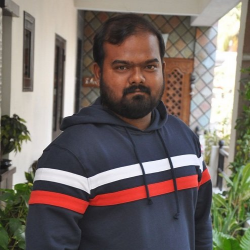 Venky Kudumula is an Indian film director, writer, Second Unit Director or Assistant Director, who has worked predominantly in Telugu movie industry. Venky Kudumula has worked in popular movies like Bheeshma, Chalo. Venky Kudumula's previous film to hit the theatres was Bheeshma in the year 2020. Serving as an assistant director on Trivikram Srinivas`s romance drama, A Aa, Venky Kudumula entered the Telugu film industry in 2016 as an Indian writer and director. After the success of A Aa, Venky went on to make his debut as a writer and director with the action-comedy, Chalo in 2018. The cast includes Naga Shaurya, Rashmika Mandanna, Mottai Rajendran, Krishna Murali Posani and Achyuth Kumar in important roles and was hitting theaters.

He came to Hyderabad and got admission in Acharya NG Ranga University. While studying commercial agriculture and business management, after that he started roaming around Filmnagar roads hoping to catch a glimpse of Mohan Babu’s and Chiranjeevi’s houses. He has started to do messages to all that directed whose film was flopped at that time and they would call back to him, he would visit directors, find out their birthdays and addresses and take a cake for them. It worked and that was how he got introduced to some directors by this he moved ahead.

Venky wanted to develop his own brand of cinema. After Neeku Naku Dash Dash,  he worked for Toofan for the Telugu version in the writing department. He joined Trivikram’s team and worked for A…Aa.

His Chalo is about a couple who fall in love in college; that college is situated between two warring villages on the Andhra and Tamil Nadu border. The students decide that whatever be problems, there should be no fights in the college and the next generation should study and grow up without prejudice. There will be many twists and the protagonist is someone who moves ahead which is why the story has been titled Chalo, explains Venky. It has been shot for 60 days and in places like Guntur, Perur, Hyderabad, Chikmagalur.