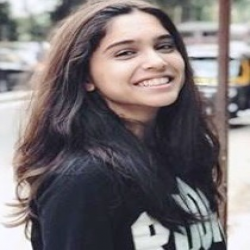 Sharvari Wagh is an actress, known for Bunty Aur Babli 2. Sharvari Wagh is an Indian film Actress, model and Dancer. she belongs to a marathi family from mumbai. since childhood. sharvari fascinated by dancing and acting. she practices dance for 13 years in mumbai. at the age of 16 sharvari stareted her modeling career in mumbai. in 2020 she makes her hindi film debut with Bunty Aur Babli 2 along with Siddhant Chaturvedi.

Sharvari was born in a marathi family. Her Father's Name is Shailesh Wagh and he is Mumbai Based businessman. and her mother name is Namrata Wagh who is Fashion Desinger, Moeover. her parents lives with her in hometown city Mumbai

In 2019, Sharvari signed her debut film Bunty Aur Babli 2 Under Yash Raj Films Producation with this project, she will make her debut in the bollywood with Siddhant Chaturvedi

In 2020 she will make her digital debut on Amazone Prime Video in a web series Titled The Forgotten Army. Moreover She Will Appear in the Forgotten Army Web Series Along Sunny Kaushal