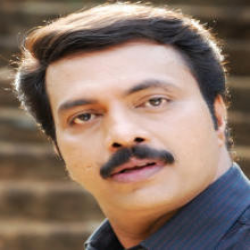 Shammi Thilakan is an Indian film actor known for his work in the Malayalam film industry. He is the son of legendary Malayalam actor, Thilakan. his partner, Santha at Pathanamthitta. He has two brothers Shaji Thilakan and Shoby Thilakan, a half brother, Shibu Thilakan and two half-sisters, Sonia Thilakan and Sophia Ajith. He did his primary education from NSS High School, Thadiyoor, Pathanamthitta. He started his career as a theater artist at the age of 15. He worked in different drama troupes like PJ Theaters, Rashmi Theaters, Chalakudy Saradhi, Kalashala Thrippunithura, and Kollam Tuna. Fazah for Chalakudy Saradhi was the first drama he directed. He directed more than 25 dramas. He is married to Usha and has a son, Abimanyu. He currently resides in Kollam with family.