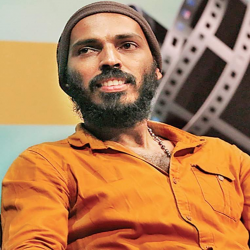 Raj B Shetty was born in Mangalore, Karnataka, He is an Indian actor, director, and screenwriter who works in Kannada cinema. He directed, wrote, and, appeared in the 2017 film Ondu Motteya Kathe. Raj B Shetty started his career as a radio jockey at Big 92.7 FM in Mangalore. Shetty then joined a theatre group and started giving plays. Along with theatre play he also started making short films after that he started a big screen movie, Recently his upcoming movie Garuda Gamana Vrishabha Vahana, in which he directing as well as acting. Film will release on June 2020.