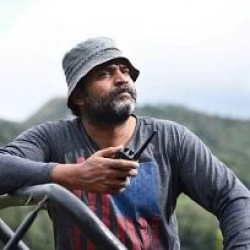 Prabhakar Podakandla is an Indian television actor and film Actor/Director, who has worked predominantly in Telugu movie industry, he has also worked in the Television industry. His directorial debut, Next Nuvve (2017), stars Aadi, Vaibhavi Shandilya, Rashmi Gautam and Brahmaji in prominent roles. His 2018 release includes Brand Babu.

He is a well-known person in the TV industry. He is a multitalented person. He has been working since from Doordarshan period. He starts his career at his 10th class onwards as a home-guard in the police department. He had an interest in Economics subject but unfortunately he not got admission but by his friend’s encouragement, he had written an exam on theatre arts and then he got a seat in Nijam College and he also awarded with gold medal in theatre arts by C. Rangarajan in the year of 1998. At his degree 1st year, he fell on love with Malayaja after 6 years of love, he married her. Now, they both are having two children Srividhya and Chandrahas. They are also acting in his serials. His daughter Srividhya got Nandhi award for her role in Anna Chellelu.

His 1st serial was Chanakya. He got a turning point at the time of Ruthuragalu serial, which was a popular serial at that time. He dubbed for more than 50 newcomers in the film industry. After that, he is known as a ‘Bullithera Megastar’, ‘ETV Prabhakar’ and ‘Yahoo Prabhakar’. Currently, he is involved in the soap opera Muddu Bidda airing on Zee. In Muddu Bidda, he is portraying a double character role. He is blessed with a son and a daughter.