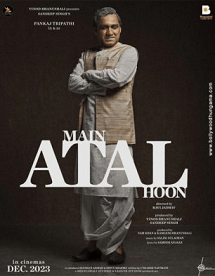 The legendary and versatile actor Pankaj Tripathi has shared his first look as Atal Bihari Vajpayee from his next upcoming project as 'Main Atal Hoon' on the former late Prime Minister's birth anniversary on Christmas 25th December 2022. The makers of the film have dropped the first look of Pankaj Tripathi as Atal Bihari Vajpayee to celebrate his 98th birth anniversary.

The actor has shared a set of photos of his look as Vajpayee and noted various aspects of his charismatic personality as the Prime Minister, statesman, gentleman, and poet. The film is slated to hit the theatres in December 2023.