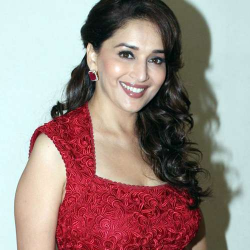 Madhuri Dixit Nene was born on 15 May 1967, She is an Indian actress, producer, television personality, and a music artist. She is also one of the most popular actresses of Bollywood cinema, she has appeared in over 70 Bollywood films. The recipient of such accolades as six Filmfare Awards, she was one of the country's highest-paid actresses in the 1990s and early 2000s and has featured seven times on Forbes India's Celebrity 100 list.  The government of India awarded her with Padma Shri, the fourth highest civilian honor of the country In 2008.

She was born in 1967 into a Marathi, Kokanastha Brahmin family in Bombay. She has two elder sisters and an elder brother. She kindled an interest in dance at an early age of three and went on to train in Kathak for eight years, later on, becoming a professionally trained Kathak dancer. Madhuri Dixit has completed her education at Divine Child High School in Andheri.  She made her acting debut in 1984 with a leading role in the drama Abodh.