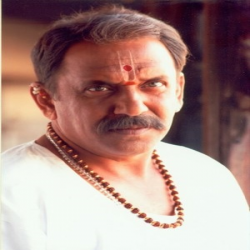 Madhav Abhyankar is an Indian film actor who started off with the 1994 film Vishwavinayak, and then went on to feature in several movies like Ya Gol Gol Dabyatla, Surajya, Poshter Girl, and Yaaro Ki Yaari. He starred in the 2017 thriller movie Dhyanimani, under the direction of Chandrakant Kulkarni, and also the Marathi comedy drama movie Shentimental, under the direction of Sameer Patil, starring Upendra Limaye, Raghuveer Yadav and Ashok Saraf in the lead roles. In 2018 he was seen in Jaga Vegali Antyatra and Figght. His 2019 releases include Aasud and Judgement.

He is a Popular Marathi actor from Pune, Her First film was Vishwavinayak (1994). He worked in one of the most celebrated and controversial plays in Marathi 'Ghashiram Kotwal' and he also worked in many Marathi TV sereials. One of the show is based on Konkan region and he is from pune so, he don't know the language therefore he firstly learn Konkani which take several months and for this he had to reduce 6-7 kilogram for this role.