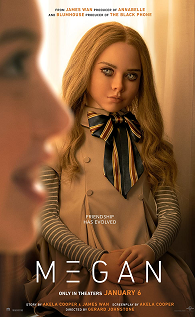 Meet the latest killer doll with 'M3GAN' as 'MEGAN' which is an upcoming American sci-fi Horror movie story by Cooper and James Wan, directed by Gerard Johnstone. Starring with Allison Williams, Ronny Chieng, Brian Jordan Alvarez, and Violet McGraw. The movie will hit the screen on the 6th of January 2023 by Universal Pictures.

The spine-chilling trailer showcases that 'M3GAN' as Megan is an artificial intelligence appearance of a doll that is programmed to be the parent’s greatest ally and importantly, the child’s great companion. It is designed by Gemma played by Allison Williams, who is a brilliant roboticist. She designed it in a way, the doll can talk, move, hear and learn to play the role of a friend to her 8 years old niece and the decisions held to be an unimaginable consequences.