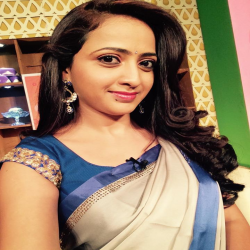 Lasya is one of the most popular TV celebrity in Telugu television industry. She has done hosting for numerous shows that have aired on almost every Telugu channel like Maa TV, Zee Telugu, and Gemini TV. In 2011, she hosted Something Special (later changed to Everything Special) on Maa Music alongside co-host anchor Ravi which made Lasya a household name. She has also featured in Telugu movies like Raja Meeru Keka and Tholi Parichayam. Her 2018 projects include Upendra Madhav directorial MLA.