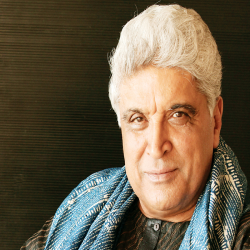 Javed Akhtar was born on 17 January 1945 is an Indian political activist, poet, lyricist and screenwriter, originally from Gwalior area. He is a recipient of the Padma Shri (1999), Padma Bhushan (2007), the Sahitya Akademi Award as well as five National Film Awards. In early part of his career he was a screenplay writer, creating movies like Deewar, Zanjeer and Sholay. Later he left screenplay writing and became a lyricist and social-political activist. He also remained member of Rajya Sabha.

In his career, in the 1970s, there was no concept of having the same writer for the screenplay, story and dialogue, nor were the writers given any credits in the titles. Rajesh Khanna is credited with giving Salim Khan and Javed Akhtar their first chance to become screenplay writers by offering them work in Haathi Mere Saathi. Akhtar was nominated to the Parliament upper house Rajya Sabha on 16 November 2009.

Akhtar was a Muslim but later became an atheist.He has brought up his children Farhan and Zoya Akhtar as atheists. Akhtar was married to Honey Irani, with whom he had two children, Farhan Akhtar and Zoya Akhtar, both film directors and actors. Javed has done 2nd married from Shabana Azmi, the daughter of Urdu poet.