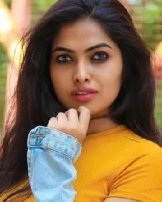 Divya Vadthya aka Divi is an Indian film Actress and Model, who has worked predominantly in the Telugu movie industry. Divya's previous film to hit the theatres was Maharshi in the year 2019. Divi takes part in the most controversial reality shows Bigg Boss 4 in Telugu along with other contestants. She completed her initial education from Jubilee Hills Public School, Hyderabad. After that, she enrolled herself at Hyderabad University from where she completed her graduate and postgraduate course in Engineering