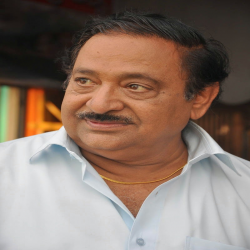 Chandra Mohan was born on 23rd May 1945 in Pamidimukkala, Andhra Pradesh. His real name is Mallampalli Chandrasekhara Rao. He is an Indian film actor, who works in Telugu, Tamil industry. For his best acting he has garnered two Filmfare Awards and seven Nandi Awards. Rangula Ratnam for this movie he recived the state Nandi Award for Best Actor, he maked movie more than 100. He also played in television show 'Gangato Rambabu' as the role of Kameshwara Shastri.

He belongs in a Telugu Brahmin family. he completes his school from Y.V.R.M.Z.P. High School at Meduru and graduated from the agriculture college of Bapatla. In his acting career he was introduced to the Telugu film Rangula Ratnam (1966). He married Jalandhara.