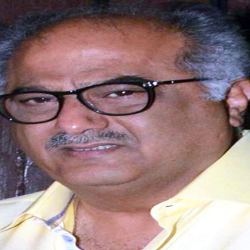 Boney Kapoor was born as Achal Kapoor on 11 November 1955 in Bombay, India. He is an Indian film producer who has produced numerous Bollywood films like Mr. India, No Entry, Judaai and Wanted to his credit. He was married to actress Sridevi until her death in 2018. He is the elder brother of actors Anil Kapoor and Sanjay Kapoor and father of film actors Arjun Kapoor and Janhvi Kapoor.

Kapoor was married to Mona Shourie in 1983 and the couple have two children, Arjun Kapoor (born 1985) and Anshula (born in 1990). Arjun made his acting debut in the 2012 movie Ishaqzaade while Anshula graduated from Barnard College. Boney married Indian actress Sridevi on 2 June 1996. The couple had two daughters, Janhvi Kapoor (born 6 March 1997) and Khushi (born 5 November 2000). On 24 February 2018, Sridevi died in Dubai after drowning in her hotel bath tub.