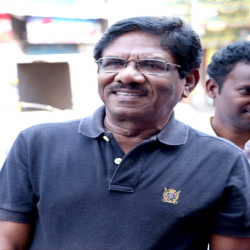 Bharathiraja was born 23 August 1942, he is an Indian film director, writer, actor who works mainly in the Tamil film industry. Making his debut in 1977 with 16 Vayathinile, he is known for realistic and sensitive portrayals of rural life in his films. As of 2017, he has won six National Film Awards, four Filmfare Awards South, two Tamil Nadu State Film Awards and a Nandi Award. He has also directed films in Telugu and Hindi. The Government of India honoured him with the Padma Shri award, India's fourth-highest civilian honour, in 2004 for his contribution to the film industry.