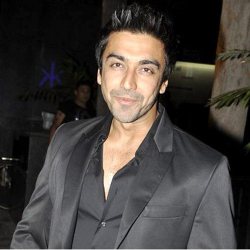 Ashish Chaudhary was born on 21 July 1978 in Mumbai,(Maharashtra), India. he is a Bollywood actor. and he is also hosted a program for Disney. He has acted in many music videos as well as advertisements. Afterwards he shifted to television shows and acted in Hum Pardesi Ho Gaye, Kya Yehi Pyaar Hai. In 2003, he acted in a movie called Qayamat along with Ajay Devgan and Neha Dhupia. His most popular movie is Dhamaal. In 2013, he came back to television and acted in a series named Ek Mutthi Aasmaan.

His wife Samita Bangargi and together they have three children a son and twin daughters. He is the winner of Khatron Ke Khiladi : Darr Ka Blockbuster Returns. Chowdhry was a contestant in the celebrity dance show Jhalak Dikhhla Jaa (Season 8) but was eliminated in the sixth week. He was last seen in the detective show in and as Dev on Colors TV. He is presently seen in Dev 2 on Colors.